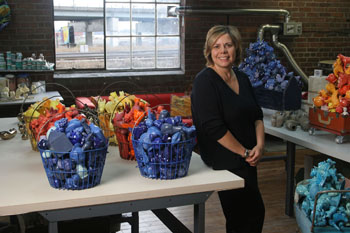 WENDY WALGATE worked as ceramic artist for over 30 years. In 2012, due to health concerns, Wendy closed her ceramics studio. She is now working with many of the same themes, such as accumulation and narratives in paper and textiles. She received a M.F.A. in Ceramics from Cranbrook Academy of Art in 1994 and completed a M.A. in History of Art at University of Toronto in April 2003. Wendy also received her B.F.A. in Printmaking and Ceramics at the University of Manitoba, as well as completing the two-year Diploma program in Ceramics at George Brown College.

As a resident at the Harbourfront Crafts Studios, she received the Artists’ Residency Scholarship in 1995.  From 2001 to 2005, she served as Vice-President and President of the Ontario Crafts Council. In 2005, Wendy was awarded membership in the Royal Canadian Society of Artists. Wendy works full-time at her studio in the historical Distillery District of Toronto and has taught at the Ontario College of Art + Design and Sheridan College.

Her work has been featured in solo exhibitions at Prime Gallery in Toronto and Network Gallery in Detroit. Recently her work was seen in British Vogue and the design book Fragiles which was sponsored by Die Gestalten in Berlin. Her work was in a Gestalten exhibition at Design Miami, in Brussels and Dubai. Ceramics Arts & Perception magazine, Issue 78 presented “As I Was Going” carriage on the cover and an article entitled “Exuberance” by Glenn Allison. See the Essays section of this website for full text of the article.